I am a bit late in posting this as we have been quite poorly here this last wee while. Anyway, better late than never!! My first book for the Artful Readers group was “A Game of Thrones” by George R.R. Martin. I did not enjoy the book and really struggled to get through it. I usually love anything in the fantasy genre but just couldn’t get into this at all. Then I realised I had read this book before. Not literally but it was very similar to a) the Dune series by Frank Herbert b) the Lord of the Rings books by Tolkein and c) The Galactic Milieu series by Julian May and I felt I was reading an amalgam of the three with a bit extra thrown in. I know many, many people who love these books but unfortunately I am not one of them. The book is based on a dynastic struggle for the crown of a large but divided kingdom, achieved via intrigue, murder, betrayal and even incest. Apart from the feeling of déjà vu, I found it difficult to engage on a personal level with any of the characters. The “main” character in this particular book, who is the lord of the Northern kingdom, seemed the only interesting personality but even he seemed to behave completely out of character later on in the book and then was killed off anyway so there was not much that made me feel I wanted to continue with the series and plough through another FIVE books in total (with another one to come yet I believe). 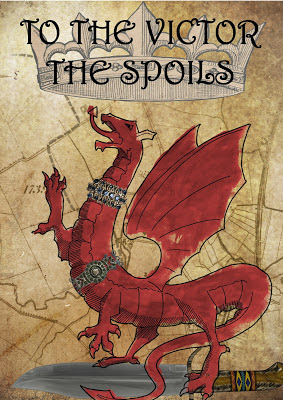 I hope you enjoy my artwork to go with the book. I am trying to master the digital program Craft Artist Professional as one of my challenges for 2013 and this piece is part of that challenge.

I am happy for you to use my ideas as inspiration for your own personal work, though please give credit where it is due. I am however not happy for my work to be copied directly and subsequently used for submission to magazines, Design Team submissions, competitions etc. Please remember that all content on this blog that I designed myself or produced is copyrighted to me. Thanks.

Blogging Chums (not on CCT DT)